The President, Nana Addo Dankwa Akufo-Addo, will today receive his national identification card, the Ghana Card, to kick-start the country’s second attempt at getting all citizens identified.

It will pave the way for the National Identification Authority (NIA) to begin the registration of all Ghanaians for the instant issuance of the Ghana Card that is estimated to take a year to conclude.

Announcing this at a press conference and media soiree last Wednesday, the acting Executive Secretary of the NIA, Professor Ken Agyemang Attafuah, said the cost to Ghanaians was “as free as the free senior high school”.

He said after a technical committee review and report on the capability of the NIA and also legal reviews of existing relationships between the NIA and its service providers, the government directed an engagement with the Margins Group of Companies for the exercise.

Therefore, in May this year, the NIA was directed by the President to begin engagements with the Margins Group for the commencement of a registration exercise and the instant issuance of cards.

Prof. Attafuah said the NIA already had a relationship with the Margins Group in the registration of all foreigners living in the country.

The registration of foreigners in the country, called the Foreigner Identification Management System (FIMS), was started on a pilot basis in 2012 and expanded subsequently, he said.

He said the success of the FIMS was one of the factors that led to the engagement of the company to undertake the national identification exercise. 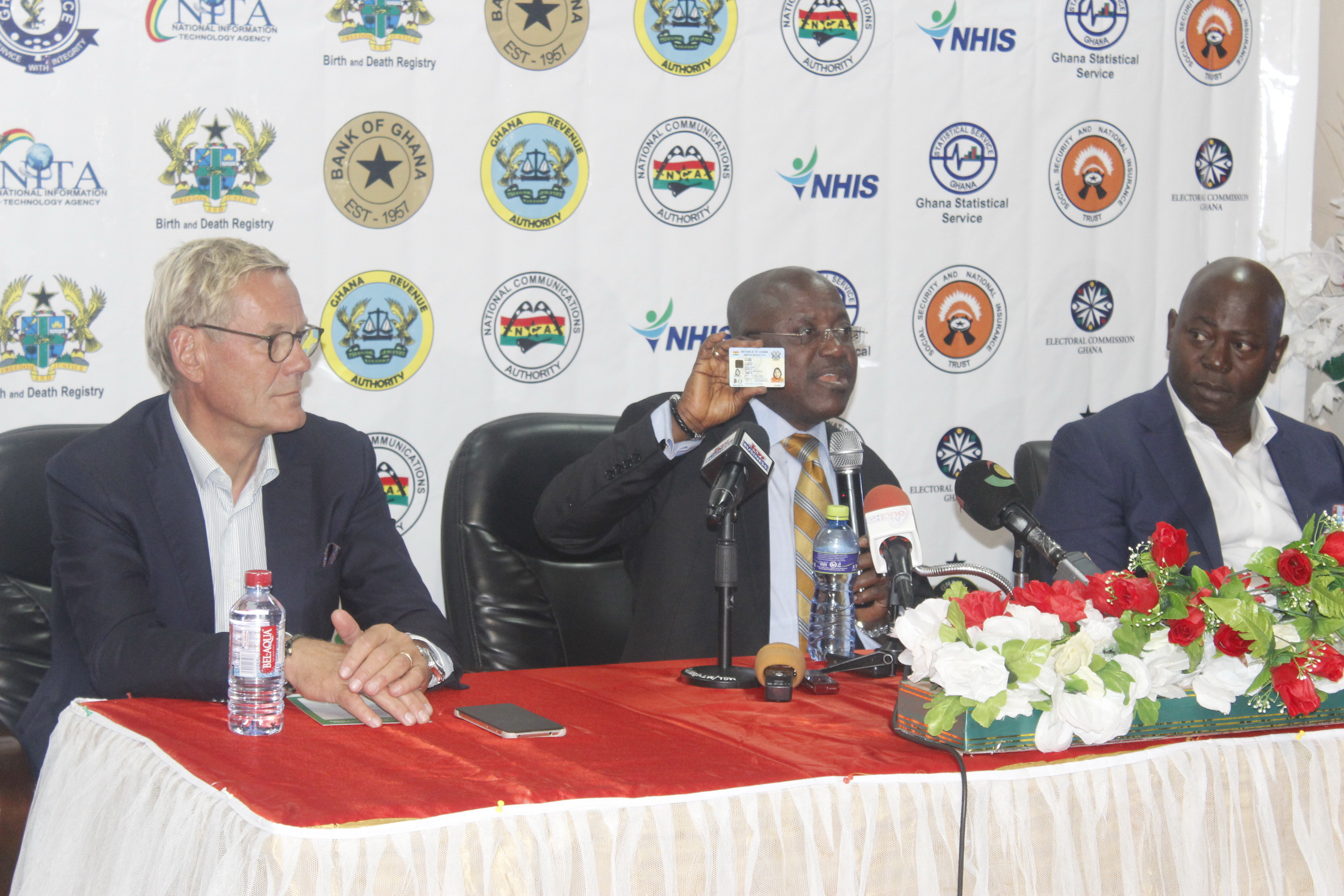 “Those cards remain valid until the person presents himself or herself at the registration centre and his or her records are updated for the immediate issuance of a new card,” he stated.

The new cards to be issued would contain features such as the applicants’ irises and 10 fingerprints, an upgrade on the old cards which had four fingerprints and which did not have the iris.

For those who did not have the card, their details would be taken at registration centres that were yet to be gazetted and announced and their cards issued instantly, he said.

The new card to be issued is a smartcard that is multifunctional and will be valid for 10 years.

It is a 128 Gigabyte capacity card with the ECOWAS logo and will be functional also as a passport in the sub-region when the Passport Office, which is one of the partners of the NIA, enables the function.

It also has functions that can enable other partner institutions, such as the Driver and Vehicle Licensing Authority (DVLA) and the National Health Insurance Authority (NHIA), to serve their clients when also later enabled.

“It will be free at the first issuance. However, when it gets lost, it will be replaced for a fee,” Prof. Attafuah said.

“The new Ghana Card will be the only document for the proof of one’s identity or citizenship or for foreigners resident in Ghana,” he said.

The Chief Executive Officer (CEO) of the Margins Group, Mr Moses Baiden, said the company was happy to be associated with the NIA in delivering to Ghanaians the service.

He said the highest international standards, quality and security in card production were being deployed in the production of the Ghana Card which would be both contact and contactless.

During a tour of the Margins Group, Mr Baiden put on show the capacity of the group in delivering a robust Ghana Card.

The Executive Director of the Margins Group, Mr Peter Blom, said Ghanaians would receive an identification card that even citizens of some developed countries did not have.

The NIA first began a mass registration exercise in the Central Region in July 2008 and the plan was to end in nine months.

Due to funding challenges, the exercise dragged until May 2010 when it finally got to the Brong Ahafo Region, with residents of the three northern regions yet to be registered.

A lull in the activities of the authority was subsequently followed with the announcement in September 2014 that it was to re-register about 15 million Ghanaians under an “expanded registration project”.

The exercise was to be undertaken with a $115-million facility from Exim China, with the registration itself being executed under a public/private partnership with the IMS.