For many people who were not born with a silver spoon in their mouths, it is their daily prayer and hardwork to do everything possible to better their lives so their children and other generations do not suffer the same fate they did.

Quite a lot of them are able to make it and one of them is Nana Ama Nhyira popularly known as ‘Silva Lady’, host of Drive Time on Oman FM, who is fulfilling her dreams one step at a time.

Of course, the road to success was not easy, it was one paved with obstacles but Silva Lady says, she is thankful to all because she has been strengthened by them.

In a chat with The Publisher, she disclosed that everything started one hot afternoon when she was still young. She sat down under a tree all alone wondering what the future held for her. As she revealed, so deep was she in thought that had anyone dared to engage her in a conversation, her response would have made her sound disrespectful.

The only thing she was okay with was the chirping of the birds as she contemplated how she would better her life. Before she got up from her thinking mood, Silva Lady said, she asked God to help her be a change agent in society especially for women and children and years down the line, it has come to pass.

The former reporter at Kings Radio in the Eastern Region some 6 years ago said, she has been very passionate about welfare of women and children over the years for just a reason.

According to her, she believes in women empowerment, adhering to better future coherence for every person irrespective of gender base. 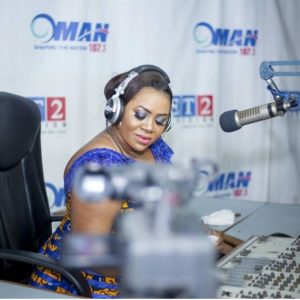 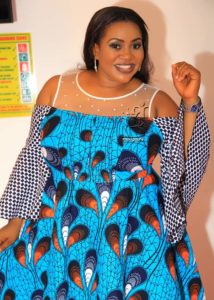 Today in addition to hosting Drive Time on Oman FM, a programme which seeks to address daily issues in society, give fruitful encounter about life, help to promote works from various Artistes of all forms, Nana Ama Nhyira is the owner of Silva Lady Foundation which focuses on empowerment and social development.

Again, she disclosed that her foundation seeks to supports women and children and she recounts how her cause to help the  vulnerable started.

”Hmmm, I am tempted to shed tears anytime I recount how it started but the long and short of it all is that, I saw this coming right from my childhood. I saw how women were maltreated and abused and told myself it was something I want  to change. I did not have it easy so I know what I am saying.

”Helping people is something I chose from infancy, and I am happy I did” – she said.

Nana Ama Nhyira’s media journey began at Fox FM after completing Institute of Business Management and Journalism and although she is doing very well now, she tells The Publisher , in the beginning, the reaction was negative.

”It has not been easy, when I set out to do these things, some people were skeptical about it, asking how possible that will be but I was focused. My focus was great that no level of negative vibes could stop me from achieving my dream” she said.

As a woman of her caliber on radio, she doesn’t only just host her show, the Drive Time Host as well does DJing attached to it – something which is not common. According to her, adding disc jockeying to her presenting work has been amazing and lovely.

”My media work has been all about talent, some come into the media space with wide hips, big backsides and many but mine has been all about delivering. My focus has all been about learning, I did learn the DJing aspect from my Ex husband” – she indicated.

According to her, tho presenting and DJing as a female is not common in the media fraternity, she sees it as a normal delivering base on talent and hardwork.

Nana Ama Nhyira believes radio experience has been very fruitful to her and optimistic of greater opportunities in years ahead.

It can take a lot of work to balance being a mother with a radio career because of the demanding hours but Silva Lady who has four children at  her end, two biological and the two others being adapted says, it has been good.

According to her, despite her work being more challenging and not easy, she believes the lesson learnt has been above all measures.

”Being who you are and mothering children who looks up to you is very challenging. Now things are different, everything has to be done in a timely manner with no excuses; if you have to be on air at 3pm and should be home if your child needs you at 7pm too, you should be there”.

Silva Lady is a graduate of Institute of Business Management and Journalism and had her secondary education also at Tarkwa secondary school, despite her current role in society, she still hasn’t given up on education. She is currently studying Communication Studies (Bachelor of Arts) at the African University College of Communications.

Speaking on the side of her Foundation, SILVA FOUNDATION, she disclosed that, her firm would engage on a free eye screening for all persons on the 6th of March, 2019 at the Belcielo Optical Services which is located on the Ring Road Central opposite starr FM.

The exercise she disclosed is dubbed GOOD EYESIGHT FOR GOOD LIFE formed part of events to create awareness of eye problems in our society.

According to her, thousands of Ghanaians suffer from various eye conditions but are unable to afford the cost of medical care to correct the defects.

This she said is a reason the SILVA FOUNDATION came into existence to sensitize and help those in need to take care of their eyes.

To ensure full realization of the goal of the foundation, Silva Lady further called on both government and the private sector to help reduce the growing number of Glaucoma patients.

Silva Foundation is a Christian Non Governmental Organization that seeks to create awareness and provide basic health care one need particularly with more attention at the deprived communities with women and children as their primary target.

Nana Ama Nhyira told The Publisher that her dream is to see an end to abuse in any form to women and children and further building the Christ-like life in all.